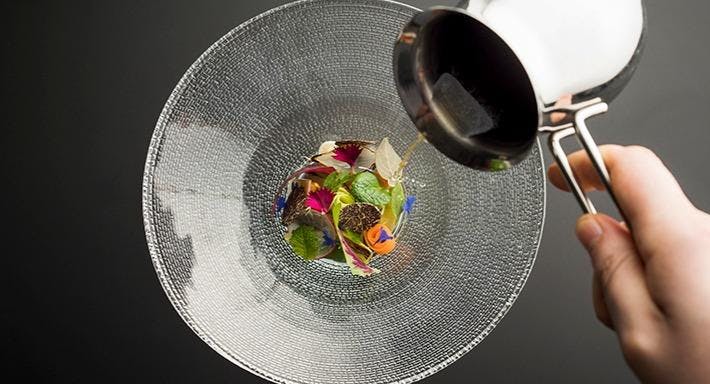 Dear diners, please be aware of the following:
- When booking for more than 8 pax, or if your preferred timing is not available, please contact Iggy's directly.
- Please include your HP number with your reservation.
- Closed on Sundays & Mondays.
- Dress code: No shorts, slippers & sandals

You rarely come across restaurants of a calibre like Iggy’s, so listen up. Named after owner and well-known restaurateur Ignatius Chan, Iggy’s bold and creative fusion fare is truly one-of-a-kind and groundbreaking, blending European and Asian influences in the most innovative of ways. Expect dishes built around seasonal produce of the highest quality and presented in an artful manner at this Orchard five-star gem, conveniently located at the Hilton Singapore on Orchard Road. Bookings are essential.

Not to be confused with an Australian rapper of the same name, Iggy’s is the brainchild of homegrown restaurateur Ignatius Chan, who had founded this multiple award-winning restaurant known for its bold and experimental takes on European and Asian cuisine. Don’t expect to find dishes that cater to the mainstream; Iggy’s goes only where truly adventurous gourmands tread, with its marriage of traditionally incompatible flavours drawn from a potpourri of high-quality seasonal ingredients. Iggy’s fearless approach in the kitchen ranks it consistently well among the crème de la crème of the culinary world not just in Asia, but around the world.

Tucked away on the third storey of the Hilton Singapore in Orchard, lunch at Iggy’s is usually a two- to five-course affair, while dinner features a lavish spread of six to nine dishes – all designed with the aesthetic in mind. Expect starters like homemade crispy taro chips and burnt oysters, as well as plates of pork cheek tagliatelle and Gillardeau oysters with caviar, followed by a jackfruit ice cream sandwich for dessert. In addition to that, the owner’s background as a sommelier means you can count on the best wine recommendations to go with every exquisite dish that graces your table. Experience world-class fine dining with an unconventional twist on Orchard Road at Iggy’s. The restaurant is situated close to Orchard MRT and we highly recommend that you book ahead.