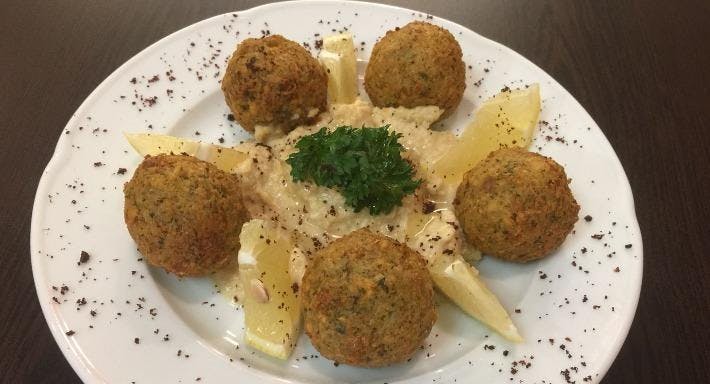 Singapore’s Bugis district has a firm ambassador for Moroccan cuisine in Deli Moroccan. Bugis itself is named for the Indonesian Buginese people, who converted to Islam some five centuries ago. The Islamic influence is indeed strong in Deli Moroccan, whose dishes bear the imprint of Mediterranean, Berber, and Andalusian traditions. Indeed, Moroccan cuisine is one of the most diverse in the world, and Deli Moroccan’s Bussorah Street premises are the perfect showcase for these warm, delicately spiced specialities.

The best nasi briyani ever! the meat is sooooo tender and the rice is soooooo fragrant! i brought my TW friends there and they loved it! Worth all your calories!=)

Deli Moroccan’s head chef Jamal is passionate about Moroccan cuisine. Hip to the traditions of this ancient crossroads of a country, Jamal takes his cues from the Moroccan royal kitchens of old, crafting dishes influenced by centuries of Berber, Moorish, Mediterranean, and Arab cooking. And Deli Moroccan’s location is unbeatable given its Moroccan remit. Located down Singapore’s Bussorah Street premises, off Arab Street, this opulently decorated restaurant with terrace seating joins a multitude of other shops and eateries all flying the Arab flag.

Couscous and tagine dishes feature prominently on Deli Moroccan’s menus, but diners can find a range of Mediterranean and Middle Eastern delicacies being created in this Bussorah Street restaurant’s kitchens. Lunch and dinner set menus are a perfect way to sample one of the world’s most diverse cuisines. Diners in Singapore’s Bugis are spoiled for choice when it comes to Middle Eastern eateries, but Deli Moroccan’s recently renovated restaurant really stands out. Choose from dining in the Moroccan-themed interior or enjoy your meal outside on the terrace, and allow bustling Bussorah and Arab Streets to transport you to a North African souk.