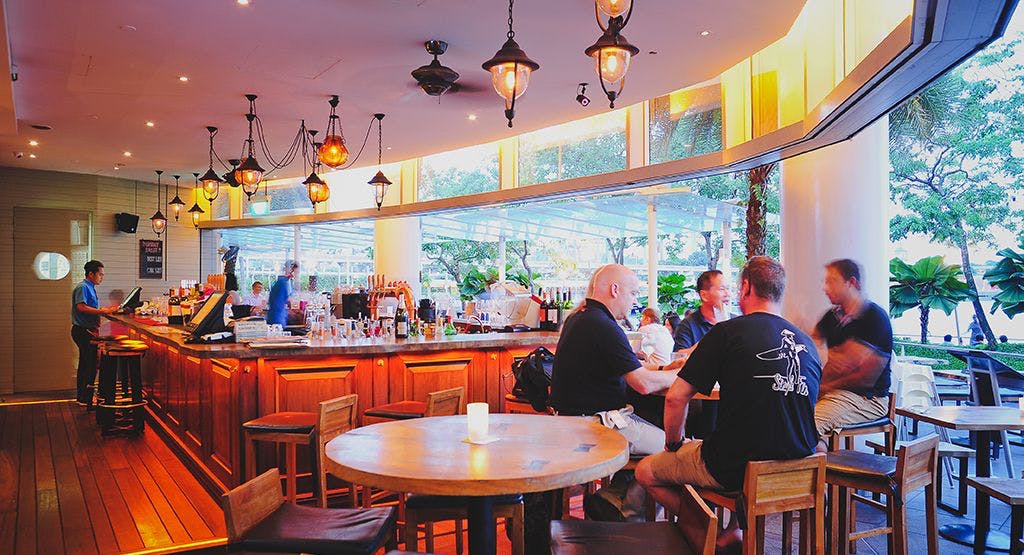 About The Queen & Mangosteen

The Queen and Mangosteen. So much of the ethos of this Vinocity restaurant and bar is given away by its name. With views out over the waterfront across from Sentosa, The Queen and Mangosteen is a quintessentially British gastropub with a Singaporean flourish. So what’s in a name? The Queen is HRH Queen Victoria and why mangosteen? Apparently this was the Queen’s favourite food and she would lavishly reward visitors who could bring this purple fruit from Southeast Asia to her court. So then, here is the collision of East and West, Britain and Singapore in this superlative gastropub.

on mango salsa with baby cress

with quince pasta and roma tomatoes

Good western restaurant at Vivo, the fish and chips is really good, will visit again soon!

Good service and food overall. However ribeye steAk was less flavourful compared to the past visits

More about The Queen & Mangosteen, Singapore

British food doesn’t enjoy a good reputation, well, anywhere. British pubs, on the other hand, are nothing short of legendary. The team at The Queen and Mangosteen seek to lure diners with the promise of an authentic British pub experience and educate them about the secret pleasures to be found in stodgy, warming British food. Vinocity’s Harbourfront Walk is an ideal spot of a gastropub. With views out on to the water, guests can enjoy food, drinks and a view in comfort.

So with sausage and mash and whopping burgers on the menu, as well as a smattering of lighter bites (we’ve been led to believe the British do occasionally eat salad) there’s plenty to line your stomach with before you delve into the drinks that you came for in the first place. The Queen and Mangosteen team make a mean Pimms. For the uninitiated, Pimms is a gin-based alcohol served with lemonade and fruit which has marinated in the drink until its alcoholic on its own and is enormously popular in the British (two week long) summertime. There’s also a host of excellent craft beers on tap, supplied by the smart people at Archipelago Bohemian Lager and Irish Ale. Head over to The Queen and Mangosteen in Vinocity on the Habourfront Walk for a taste of Britain in Singapore.