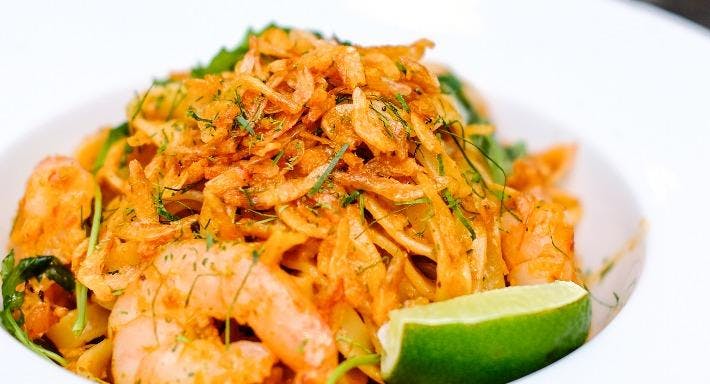 Dear diners, please specify in ‘special request’ if you do not wish to be seated at high tables.

Additionally, please note that the kitchen is closed on weekdays from 3pm to 5.30 pm and on weekends from 4pm to 5.30pm. Only drinks and desserts are served during this time.

The brainchild of DP Architects and GRUB, redpan has a bit of an edge to it. Singapore is overloaded with places you could say this about: this is funky fusion food in a cool space. But in this case we actually mean it. DP’s experienced eye for design and attention to detail is evident in every little aesthetic feature, while GRUB pull together the best of local Singapore produce and global cooking styles to dish up a range of unique western and Asian fusion dishes. Singapore has no shortage of restaurants, but few (if any) have a formula quite like this one on Raffles Boulevard (in Marina Square), and it’s well worth a try.

Portions can be slightly more then worth of value. Good taste nice and quite creative.

Restaurant was tucked away at a more secluded corner of the mall, which is great if you prefer some personal space and serenity while you dine. Service was great and prompt, probably because it was pretty empty when we went on a Sunday afternoon. Would recommend the truffle floss fries and dry Bak kut teh if you like the peppery taste of it. Had a pleasant meal!

Cozy environment to gathering with friends and family. Overall nice

redpan, inside Marina Square on Raffles Boulevard (not far from Raffles Place), is the result of a collaboration between one of Singapore’s most established local architecture firms and one of Singapore’s most dynamic young culinary ventures. DP Architects and GRUB each inject character into redpan’s elegant but modern venue in unpredictable ways – the former through the sleek design and creative furniture layout, the latter through the tantalising Asian fusion plates that get brought out. redpan has a reputation that is growing by the day, and the queues are following suit, so at this point it’s wise to reserve a table well in advance to be sure you don’t miss out on a unique eating experience.

A lot of focus is on local Singapore traditions and produce. However, redpan are certainly not afraid to take this as a starting point, introducing these ingredients and Asian staples to international tastes and cooking styles. How about a braised beef rendang taco, or the truffle duck confit version, topped with hoisin and crispy wonton strips? The bak chor pasta (tagliatelle tossed with minced pork stew, seared pork belly and topped with a piece of foie gras) is a trophy of Asian-European fusion done well, though if it’s western comforts you’re after then the New England fish and chips are a firm favourite among Raffles Place regulars.. You’ll find redpan on level 2 of Marina Square on Raffles Boulevard, not far from Esplanade MRT.